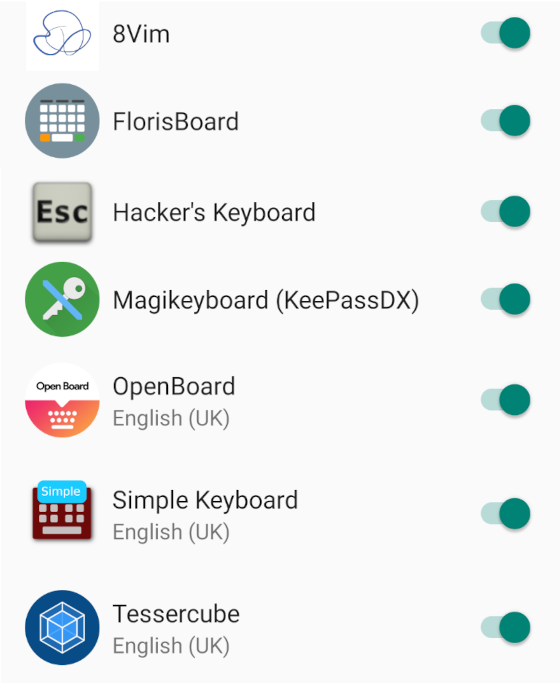 I do use my phone daily, and although I try to limit the time I spend using it to the most productive minimum, the virtual keyboard is the core experience. It would be very hard to use the phone without it. Being so important, I decided to try some keyboards available on F-Droid. Here's the list of keyboards I have tested with some highly opinionated remarks.

As the name suggests, Simple Keyboard is really simple. It's description specifically states the keyboard currently does not and probably never will have features such as emojis, GIFs, spellcheck or swipe typing. I do use emojis when chatting, so this one did not work for me.

Hacker's keyboard is the keyboard that matches many other Free and Open Source Software (FOSS) apps produced by the community. What usually happens when most features people request or contribute are pulled in, is that the app accumulates many settings to make use of the many features, especially when the features compete with each other.

The keyboard claims be well suited for SSH access because of the working Tab/Ctrl/Esc keys, but I am not there yet. Unfortunately, the keyboard was not updated for approximately two years. While it might be feature complete, for many people including me, it feels safer investing time learning software that is actively maintained. Definitely worth a try, however.

OpenBoard is based on Android Open Source Project (AOSP). It is similar to the default keyboard for Android, Google Board or Gboard for short, but without all the Big Data. Some users find it at ~45 MB quite space-consuming. I believe that the size affects load time. The faster the keyboard loads, the more pleasant the typing experience on the phone can be. There are definitely some more lightweight solutions available if the size or load speed is prioritized. But for a regular privacy-oriented FOSS keyboard, this would be my choice. However, even though it has the ability to support Slovak language, there are no Slovak words in suggestions, which is strange.

FlorisBoard aims to be aesthetically pleasing, modern keyboard focusing on privacy. It is currently in alpha stage, so it still has some rough edges, but it already has a ton of features implemented, for instance adapting the theme based on the app in which it is used.

Among the features I have tested is a prioritization of the hinted symbols (long press on the letter). My mother tongue is Slovak and I would love if I could choose the order of offered accented characters, especially in English language setting. Most of the keyboards I have tried order the accented characters in sub-optimal way for writing Slovak words.

Unfortunately, these settings in FlorisBoard, while a step in a right direction, did not provide granular enough settings for me. What is worse, Slovak is not among supported languages on this board yet, so some characters are not available at all. But I would like to get rid of changing languages entirely, I find the need for doing so on either virtual or physical keyboard kind of a hindrance anyway.

I am also a heavy user of KeePassDX and keyboard it provides (it is called Magikeyboard) has the button to switch back to the regular keyboard with a simple touch (it also offers to switch back automatically in some cases). Yet with most regular keyboards, changing between keyboards is time consuming. Usually, it requires a long press on space bar and then choosing the keyboard from the list.

With FlorisBoard it is possible to switch to the last keyboard via swipe, which makes switching almost instant. It looks like it is the only keyboard I have tested that provides this feature, which is a very big plus. I am definitely keeping an eye on it. When some bugs are fixed and the suggestions bar with Slovak words become available, it could become my daily driver.

8vim introduces a rather radical way of writing on the phone. It is based on 8pen and it definitely accumulated some core fans over time. The only thing I have found 8vim has common with vim editor, apart from the name similarity, is the steep learning curve. While I found the experience it provide quite novel, and even enjoyed it to some extent, I did not find the keyboard stable enough to be my daily driver. It also lacks languages or accented characters for that matter. I believe, given some more polishing, it could mature into a very useful tool in the future, but I am not adapting to it just yet.

TesserCube is quite an outlier here, because it's main purpose is a OpenPGP encrypted communication between two users that both use TesserCube. I find the idea fascinating, as it, at least in theory, makes possible for two people to communicate via unencrypted medium without 3rd party understanding the communication. I did not test it and I believe there still would be some metadata leaking obviously, but it is a nice approach anyway. The keyboard it provides is very similar, or maybe even identical (or based on) Simple Keyboard, but with the added encryption. I would love to see it working in real time.

So far, I am sticking with Gboard, as it has by far the best multi-lingual support. It is not the outcome I have hoped for but since I am using stock Android and Google for most my searches anyway, ditching their keyboard won't make a big change in the way they gather data.

OpenBoard feels the very stable, claims to respect my privacy and has the features I am currently used to, but the unfinished Slovak support is discouraging. It could probably be fixed. FlorisBoard also seems like a promising choice for the future, due to it's unique features, especially the synergy with KeePassDX's Magikeyboard.

Note that AnySoft keyboard did not make it to the list because I could not find the way to install it from F-Droid, but many swear by it, so it deserves a mention. Links to the tested keyboards: