In the previous short article about installing Nextcloud I did not provide much details, apart from port configuration (that might even be needed depending on other factors). The setup I chose just worked. However, I too found the basic SQLite database performance a little bit lacking and decided to use a PostgreSQL database instead, as a fresh install.

For a PostgreSQL under docker-compose I've used the same steps described in my guide for installing Mastodon with docker-compose. It works there, I do not understand the drawbacks yet, so why come up with something wildly different? Here's a condensed list of steps, explanations are in the above link.

The name of a directory would matter later, I prefer just a short nextcloud.

Please choose a different password in the two commands above.

Edit the docker-compose.yml and add the database section near the top:

The volume path above has to be the same as the one in the docker run above, although a relative one like here serves well. Also, make the app service depend on the db service:

A source file for the inspiration and list of changes I did there could be seen in this commit. With the docker-compose.yml ready, start the script:

Set up a reverse proxy, however you see fit. Again, inspirations can be found in the posts under tags Nginx and especially acme.sh. The important bit is the exposed HTTP port, a line 37 in the source code example. This is what I was surprised about in the post Reverse proxy behind a reverse proxy. Here a port 8081 is where the Nextcloud is listening.

Access the site, fill in the admin username and password. Do not change the Data folder path. Then choose a PostgreSQL database and fill the following: 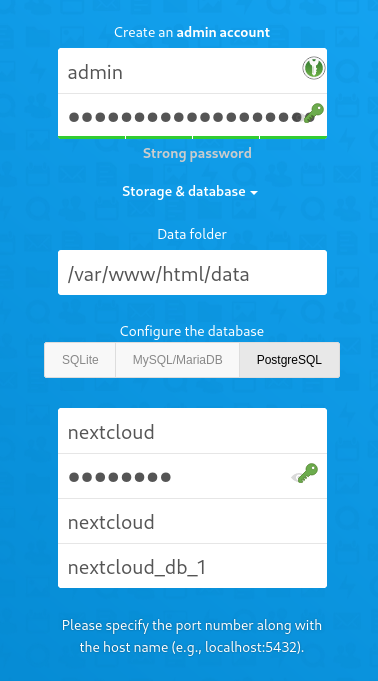 Here, the same input data in the table, in case the picture is unreadable:

The last step is to setup the OnlyOffice, which to me already proved to be a very useful tool overall. Run the set_configuration.sh script from the repository: